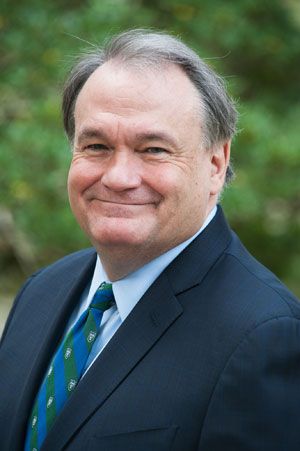 Michael A. Fitts, one of the country’s foremost higher education leaders, is the fifteenth president of Tulane University. Since joining Tulane in 2014, President Fitts has repositioned the university by taking advantage of its natural strengths: its unique history, location, culture, size, and structure. Under his leadership, Tulane has become a world-class academic environment that fosters path-breaking interdisciplinary research, innovative teaching, and a holistic student experience.

Fitts has overseen the expansion of Tulane’s research enterprise to confront society’s most complex challenges – current and future. During his tenure, Fitts has recruited eight nationally acclaimed academic deans and a vice president for research. Concurrently, he has established nine endowed presidential chairs, recruiting some of the world’s most innovative thinkers and researchers to Tulane. He has bolstered administrative and financial support for research across the university while launching numerous groundbreaking interdisciplinary research centers including the ByWater Institute, the Department of River and Coastal Studies, the Brain Institute, the Center of Cellular and Molecular Diagnosis, and the Center for Environmental Law. These hubs for learning and discovery combine faculty from the breadth of Tulane’s schools and disciplines to work on the world’s most intractable problems, while also providing unique undergraduate and graduate research opportunities. As a result of these efforts, sponsored research awards at Tulane have increased by 46 percent since 2015.

Fitts believes that the most innovative teaching, learning, and research occur when examining issues through a variety of lenses across different fields. To deepen those opportunities for students, he oversaw the restructuring of the undergraduate honors program. The reimagined program requires students to engage in long-term interdisciplinary research and community service that connect theory with practice – both trademarks in his scholarship and academic leadership roles. In addition, Fitts has increased funding for and launched new programs to support career services, academic advising, success services, and student retention. A new residential quadrangle, opening fall 2022, will expand Tulane’s academically themed Residential Learning Communities. These communities enrich the student experience by promoting cross-cultural, cross-disciplinary, and social-academic interactions. Fitts’ master plan for the university includes the renovation of every existing residence hall on campus, a process that is well underway. Tulane’s unmatched student experience and unique, relational culture have triggered a surge in interest by prospective students. Undergraduate admissions continue to break records annually in the number of applications received, selectivity, and yield. From 2016 to 2021, the number of undergraduate applications has risen from 32,000 to more than 45,500. In the same period, the percentage of students admitted has moved from 25 percent to less than 10 percent, and the number of accepted students who choose to attend Tulane has risen dramatically – from 23 to 45 percent.

Fitts recognizes that equity, diversity, and inclusion are fundamental to advancing intellectual rigor, learning, and scholarship. He is committed to creating a community and culture that foster a sense of belonging for all. Since 2015, each incoming class has broken all previous records as Tulane’s most academically qualified and diverse first-year class ever. Since joining Tulane, Fitts has doubled annual spending on equity, diversity, and inclusion initiatives. He oversaw the hiring of the university’s first chief diversity officer to lead many of these efforts, including the recruitment and retention of faculty of color and the Presidential Commission on Racial Equity, Diversity, and Inclusion. He has increased financial aid and invested in pipeline programs to make a Tulane education more accessible and affordable to students from all backgrounds. One such program, Louisiana Promise, was launched in 2020 to provide debt-free scholarships to Louisiana high school graduates whose families make less than $100,000.

Early in his presidency, recognizing the urgent need to ensure all Tulane students feel supported when they arrive, Fitts authorized the creation of the Center for Academic Equity as a hub of services for first-generation college students, LGBTQ+ students, and students of color. Under Fitts’ leadership, the Office of Multicultural Affairs, Office of Religious Life, and Office of Gender and Sexual Diversity were renamed the Carolyn Barber-Pierre Center for Intercultural Life. In addition to increased funding, the Richardson Memorial Building on the Academic Quad underwent a complete renovation to become the new campus home for both centers, creating expanded office and gathering spaces to host social, cultural, and academic programming for students.

Fitts also launched the Tulane Trailblazers program, a university-wide effort to celebrate accomplished, diverse Tulanians through the naming of buildings, spaces, faculty chairs, lectureships, scholarships, and other similar honors. Thanks to intentional collaboration with faculty, staff, students, and alumni in these efforts, diversity within the Tulane community has improved significantly since 2015. To support and grow Tulane’s faculty and staff, the Tulane Leadership Institute was launched in 2021 to identify and nurture future university leaders. The institute’s two inaugural cohorts, Emerging Leaders and Anti-Racism Leadership, are designed to align individual professional growth with university values and aspirations, with a strong focus on inclusion.

Fitts initiated the creation of a master plan for a 21st century campus redesigned to spark creative collisions, foster collaborations, and build community. Under his leadership, Tulane’s campuses are undergoing $1 billion in additions and upgrades. In downtown New Orleans, where the university has long had a presence, Tulane is transforming from a collection of buildings into a vibrant, bustling, downtown university community. A future campus hub will be the iconic Charity Hospital, in which Tulane intends to be the anchor institution. The Charity redevelopment will provide essential new laboratories and research spaces, classrooms, dining, housing, and administrative offices. Tulane is also establishing an Innovation Institute on the downtown campus, designed to support systematically the market development of intellectual property emanating from university research. Additional capital projects downtown include a new university police station, the Stewart Center for Executive Education, and Thirteen15 Gravier (graduate student housing).

Securing a Robust Financial Future for Tulane and New Orleans

Fitts believes that Tulane’s collaborative spirit extends far beyond the physical boundaries of its campuses. Tulane’s location in New Orleans enhances its vitality, innovation, creativity, and diversity. Likewise, New Orleans has a richer past and brighter future as home to a major national research university like Tulane. As the largest private employer in Louisiana, Tulane has a $3 billion economic impact in the region, supporting more than 19,000 total jobs statewide – 14,000 in New Orleans alone. Visiting families, alumni, patients, and students attract $312 million in annual spending.

Recognizing that the fates of Tulane and New Orleans are inextricably linked, Fitts has worked to ensure that Tulane will benefit from a secure and robust financial future. Upon arriving, Fitts conducted an operational review and restructured the university’s budget, balancing the university’s budget for fiscal 2017. He also oversaw the university’s transition to a responsibility-centered management financial model. Through today, fiscal 2021, Tulane continues to achieve positive operating margins each year – a sustained, positive financial record unmatched in prior decades. According to Forbes, “Among top-tier colleges, few have improved in financial strength as much as New Orleans’ Tulane University… In the last five years, its financial grade rose from a B to an A-minus.” Through the Only the Audacious campaign, launched in 2017, $1.3 billion has been raised – breaking all school records, meeting the campaign’s goal, and almost doubling the university’s endowment in a five-year period, from just over $1 billion to about $2 billion today. The performance of Tulane’s endowment also consistently ranks in the top quartile of all universities nationwide.

At Tulane, Fitts also holds the position of Judge René H. Himel Professor of Law at the law school. He is the current President of the Louisiana Association of Independent Colleges and Universities and serves as Vice-Chair of the American Athletic Conference. Prior to coming to Tulane, Fitts served 14 years as dean of the University of Pennsylvania Law School, where he was also the Bernard G. Segal Professor of Law. As dean of Penn Law, Fitts was recognized for greatly expanding the school’s offerings in interdisciplinary education. He presided over a quadrupling of the school’s endowment, a more than 40 percent increase in the size of the faculty, and a doubling of all forms of student financial aid. He oversaw the rebuilding or renovation of the entire law campus. Penn Law’s Board of Overseers named a faculty chair, a scholarship, and an auditorium at the school in his honor.

Fitts’ teaching career began at Penn Law in 1985. He has written extensively on presidential power, separation of powers, executive branch decision-making, improving the structure of political parties, and administrative law. He served as president of the American Law Deans Association. He has published numerous articles, book chapters, and reviews in the nation’s leading law reviews, including the Yale Law Journal, Michigan Law Review, Georgetown Law Journal, and the University of Pennsylvania Law Review.

Fitts grew up in Philadelphia. He earned a bachelor of arts degree from Harvard University in 1975. Inspired by To Kill a Mockingbird and its heroic protagonist Atticus Finch, he attended Yale Law School. He was an editor of the Yale Law Journal and received his juris doctorate in 1979. He served as a clerk for federal judge and civil rights advocate Leon Higginbotham, who became a mentor to him. Fitts then worked as an attorney in the U.S. Justice Department’s Office of Legal Counsel, which serves as outside counsel to the President, White House, and Cabinet. He and his wife, Renée J. Sobel, Esq., have two adult children.